As a concerned American watching more and more depressing news reports from the Middle East, I was taken aback when I recently came across some anti-American propaganda. 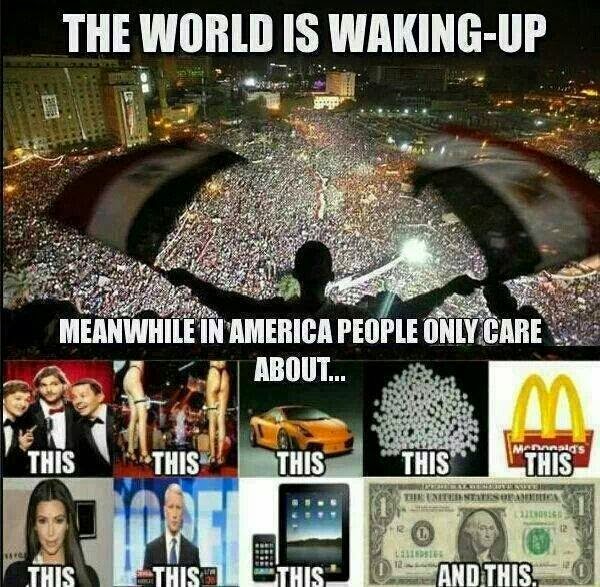 The Middle East needs to wake up not America. I was happy when I saw the Arab Spring taking place thinking good for the oppressed finally throwing off the yokes of tyranny, but now you're standing around waiting for someone else to put everything together for you and pointing fingers of blame at one country half way around the world as to why you cannot rise up to the task of rebuilding your countries and forming governments that are not oppressive in their own right? America didn’t get formed overnight by a country on the other side of the planet. We had very little help throwing off our own oppressors, the real imperialists, England, Spain and France to name a few empires from history. We were conquests and territories to be played with like pawns in chess. Once we broke free we didn’t have countries lining up to help us. We had predatory creditors lending to us to reap profits off the new country, and when they thought our guard was down they tried to re-establish dominance over us. Yes, we rose to be a player on the world stage, and I don’t think that happens if you’re asleep; however, my point is look to yourselves not America to be your nations’ salvation. From the outside you appear to be asleep, replacing bad governments guilty of torture, theft and murder with worse governments guilty of torture, theft and murder done with religious fervor. America cannot change your intolerance and hatred of others or your philosophy of destruction. You must decide to build instead of destroy, to live instead of die.
Posted by The Political Poet at 8:01 AM 1 comment:

My next radio appearance!

My next radio appearance will be August 15th at 6PM EST on Everything Paranormal with Mark and Jeff. Do you have questions about the afterlife? Bring them and join in.

Listen and Chat with me on Everything Paranormal Friday August 15th at 6:00PM EST
Posted by The Political Poet at 6:49 AM No comments:

Please share, corporations are not citizens, people, humans, homo sapiens. They can not have political beliefs (bad call Supreme Corporation (oops) Court on the Citizens United verdict.) Corporations can not have religious beliefs either another bad call by our life appointed judges to the highest court in the land. Corporations do not have brains ergo they can not think to form beliefs. If these individuals or groups want their rights of religious freedoms then quit trying to have your cake and eat it too. They want the financial protection given to their private fortunes afforded by forming a corporation because it isn't a living breathing entity. People can not seek damages beyond the assets of the corporation thus protecting their individual wealth. Corporations insulate against many taxes and families can transfer the wealth from generation to generation without some of the hangups actual people deal with. The government can fine a corporation, but it can not throw it in jail no matter how criminal (i.e. BP) people can be thrown in prison. YET!!! What these same families want is to pick and chose what laws they follow. They want to be treated as corporations when it benefits them, but they want to circumvent the corporate laws they don't like as individuals. Bull :poop: become unincorporated if you want your personal religious freedoms or political views. What next is our Supreme Court going to give corporations the right to vote? Claim exemption for their children on their tax returns? If the Internal Revenue Code doesn't allow corporations to claim Social Security Tax exemptions for the owner of the corporations' children because corporations can't have children due to not be a living breathing entity then how can the Supreme Court use a different standard for religion and political views. All they did was create a corporate get out of obeying the law card for political reasons. The court which is suppose to be neutral and keep the balance in our government by interpreting our Constitution and Bill of Rights, not the Republican Party or Democratic Party platforms. If you still don't understand how stupid our court ruled then think of this for clarification. If a crazy gunman walks into a McDonald's shooting and a police officer can save a pregnant woman or the cash register, one or the other, the court just told the cop to save the cash register which sadly enough explains everything wrong with our country today. :(
Posted by The Political Poet at 8:50 AM 1 comment: