DON’T JUST SIT ON THE FENCE.CUT IT!
We clasp hands and shed clockwork tears
To watch our dreams appear on the screen
Ghetto defenders long for a new world deal
Urban memoirs overshadowed by naïve myths
Difficult borders governed by the demand of black gold
Quarantined beliefs, falsified by thought
Self preservation for the red, white and blue
Induced collapse of industrial prowess
New dawns are a human new life
Our modern world is our reshaping of the past
Secular generations always take first spot
Who you be next for the first morning star
by Stephen Bell
About the Author
Stephen Bell was born January 18, 1964. Living and writing in Egremont, Cumbria, he is father to two sons and husband to author Shawn-a-lee McCutcheon-Bell.

His work is a mixture of poetry versus story. A blend that leaves the reader open to their own interpretation. He has contributed his talents to the books 'Reverence of Rune', 'Death Do We Part', as well as co-authoring the poetry novel 'Snips in Time'.

Find Stephen on the web at www.myspace.com/grumpypunkk or http://salsteve.blogspot.com
Posted by The Political Poet at 10:21 AM No comments:

Dear Friend,
While deciding how to fund the government for the remainder of the fiscal year, House Republicans tried to zero out all funding for the Corporation for Public Broadcasting (CPB), the nonprofit responsible for funding public media including NPR, PBS, Pacifica and more. And recently, House Republicans pass an emergency measure to defund NPR.
If the Republicans are successful, it would be a tremendous blow to the entire public interest media sector.
We cannot allow Republicans to destroy public media.
I just signed a petition telling Congress to fully fund NPR and defend public service media. You should too. Click below to take action.
http://act.credoaction.com/campaign/dont_defund_npr/?r_by=18537-3916483-EUVJ57x&rc=paste1
Posted by The Political Poet at 10:59 AM No comments:

The Political Poet would like to thank everyone who submitted poems for the Poetry Month Competition in Honor of Walt Whitman. Many poems were entered, but only a few could be chosen as finalists. We would like to remind poets having the courage to submit poems makes you winners regardless of placing as finalists or not. Finalists’ poems and bios will be posted throughout the month of April. The Honorable Mention will be posted at the end of March.


Don't forget to follow me on Google friend connect by clicking on the button on the right then selecting follow or on Twitter @PoePlace
Posted by The Political Poet at 5:12 PM No comments:

Here are the top 10 reasons for the United States government to print more money, pay off the national debt and let inflation take its course. Number:
10.      It would solve the illegal immigration problem. Illegal and guest workers alike would race out of the country and head for countries where the money is worth something like Mexican Pesos or Indian Rupees.
9.        Counterfeiters would quit making American money because inflation would always make the cost of the ink and paper they just used worth more than the money they just printed. The government doesn’t have to deal with that same problem because they can print the money magically just by typing numbers in on a computer.
8.        Home values would go through the roof, no more negative equity, no more banking crisis.
7.        Everyone could pay off their debts because we’d all be millionaires. Wages have got to keep up with inflation, and people on entitlements get cost of living increases by law, right? It’s not like the government would freeze COLAS for retirees or employees when everything is increasing.
6.        This one makes the Tea Party people, the Democrats and the Republicans happy. No more deficit spending, the government will always maintain a balanced budget. It will electronically print the shortfall. We don’t need to cut back on any budget items, double the pentagon’s budget, triple entitlement benefits, and give everyone universal healthcare, dental and optical, cut everyone’s taxes in half. Don’t worry we’ll be able to afford the low taxes because we’ll make up for it up in volume.
5.        Our trade deficit will disappear overnight because no country will sell us their goods for worthless money, but our exports will go through the roof because our stuff will be cheap in comparison to Mexico, India or China. Added bonus, we will lose our dependency on foreign oil because they will no longer sell it to us. Although at this point, I’m not so sure we wouldn’t just take it from them anyway. It’s not like it is really their oil. They just happen to be living over top of it, right?
4.        The rest of the world will hear a giant sucking sound from jobs leaving. Only this time the sound will be those jobs rushing back to the cheap labor of the United States of America because we all know industry flocks to the cheapest labor. They can pay us millions and still make plenty of Pesos or Rupees in profit.
3.        The super-rich 1% would have to invest their money quickly creating jobs or actually get jobs themselves because the money their families have lived on for generations will become worthless. Actual labor would become the most valuable commodity. Slogans like “Look for the Union Label” would mean something again, higher wages.
2.        Our politicians would no longer be for sale to lobbyists foreign or domestic. Basically, it isn’t that they still wouldn’t want bribes, I mean contributions, but none of the politicians can count that high.
1.        And the number one reason for the United States Government to print more money, pay off the national debt and let inflation take its course. To get rid of the $14,250,000,000,000.00 and rising in debt mostly owed to communist China. It will piss the Chinese off, and they’ll never lend us another dime.
In seriousness, our country has been artificially holding down inflation by adding to the national debt since the 80s. The only people this seems to benefit are the super-rich 1% living off their wealth not their own labors, and the rest of us are asked to bite the bullet. Print the money electronically, and pay off the debt. Increase pensions and entitlements with real COLAs, and let inflation take its course. Our trade deficit would become a surplus, and you'd hear a giant sucking sound from companies rushing back to the USA because of the cheap labor. Illegal aliens would race to go work in other countries, maybe their own. People will pay off their debts and have new manufacturing jobs. Property values would increase for real, along with wages. The wealthy would have to invest their money quickly to create jobs or get jobs themselves. One thing is for sure, the people who do the actual work in this country would benefit.
My grandfather told me back in the late 70s that inflation was his best friend. He explained that his private retirement was worthless, some $60.00 a month, but his social security was $700.00 a month because of the COLAs mandated by law to increase his social security to keep up with inflation. I didn’t understand as intelligent and wise as I knew my grandfather to be how the WWII vet could say something so crazy, but he elaborated by saying he was debt free because of inflation. His 30 year fixed mortgage with a payment of $30.00 a month, half his monthly retirement, was paid off almost 20 years ahead of schedule. I could see his point, and I always made sure I got a fixed rate because he convinced me inflation would strike again someday. He, also, bought gold and silver. The one time I listened to a banker to get a fluctuating rate because it would save me so much money, I saw my payment skyrocket the very next year. I immediately paid points and bought down my interest rate while switching to a fixed rate mortgage, listened learned. I still think that WWII generation knew quite a lot.
To see the actual running national debts go to http://www.usdebtclock.org/ . You can see several eye opening details including the yearly budget deficit.


Discover an online criminalist education.
Posted by The Political Poet at 4:56 PM No comments:

The Political Poet poetry competition is now closed. Thanks to all entrants. Entries received with a post mark on or before March 15, 2011, will still be considered. Winners will be contacted prior to posting and may provide bios and school shoutouts if desired. Contestants will be contacted for any clarification needed regarding their submissions before final determination of the finalists. Finalists will be announced March 31st, and they will be posted throughout the month of April.
Posted by The Political Poet at 2:38 PM No comments: 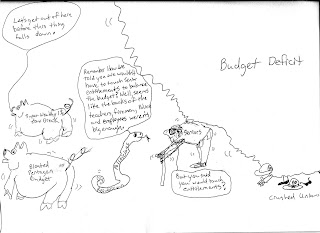 Posted by The Political Poet at 12:12 PM No comments:

Is a Class War Brewing?

Is a class war brewing in the USA? With millions of Americans unemployed and evicted from their homes, our government wants to add insult to injury by budget cuts aimed at those already hurting. Now, they want to bust unions for working men and women. Most are attacking government employee unions at present, but some states are going even farther and trying to destroy private sector unions. Why do people claiming they want government to stay out of their business support government banishing private unions' collective bargaining rights? Funny, they scream government can't hobble private business with rules or regulation from oil companies to Wall Street firms; however, these same big businesses often drink at the public well. Watch this speech by Michael Moore in Wisconsin! Is our America heading for a class war? You be the judge.
http://www.michaelmoore.com/words/mike-friends-blog/america-is-not-broke
Posted by The Political Poet at 10:20 AM No comments:

I just finished my first real photo shoot for an upcoming magazine article. I have a new respect for models. We battled the wind. We had to tape stuff down, and we had to wiggle through sticker bushes to get to the place the photographer shot the photos. It took a lot longer than I thought, but if he can make my mug look good then it was worth it.
Posted by The Political Poet at 11:00 AM No comments:

Quatrain poems are four lines of verse with a single or double rhyme. The American style quatrain may or may not have a syllable count or pattern. The single rhyme quatrain has a-b-x-b or a-b-a-x as the rhyme pattern. The double rhyme quatrain has a-a-b-b, a-b-a-b or a-b-b-a as the rhyme pattern.
Examples by Frank G. Poe, Jr.: Single Rhyme Quatrains
Single Rhyme a-b-a-x
New Desert Rose
Will democracy’s flower flourish
In Libya’s Saharan desert sun
Or wilt malnourished
Under black rain from gunships?
Single Rhyme a-b-x-b
Desert Ice, Ice Baby
Voices cry out for freedom while
Fighting mercenaries for the streets
Gadhafi’s power and mind melt
Ice sculptures in the Libyan heat
Examples by Frank G. Poe, Jr.: Double Rhyme Quatrains
Double Rhyme a-a-b-b
Get Out of Debt Free Card
The difference between our government and you
They can do something about debt, you can’t do
Don’t laugh although it sounds funny
They could always print more money
Double Rhyme a-b-a-b
Hello, Inflation
Hello, inflation grandpa said you were his friend.
Making our government look like a brain damaged clown
Adding to the national debt, fighting you to the end
But you, inflation, won’t be artificially held down?
Double Rhyme a-b-b-a
What will China say?
I’ve got a solution to our national debt
Print the money we need to pay it off in a day
And China won’t lend us anymore money that way
Accruing no interest on any loans, we won’t need it.
Posted by The Political Poet at 3:33 PM No comments: